Orchids: They Outnumber Us. And They’re Kinky. I Learned Three Things About Orchids.

I was given a beautiful orchid by a friend. I’ve always been fascinated by their stark, alien beauty. I’m learning how to properly care and nurture this plant. So, I’ve been doing a lot of research on orchids and I’m becoming obsessed.

Orchidaceae, commonly called the orchid family, is a diverse and widespread family of flowering plants, with blooms that are often colourful and fragrant.

Along with the Asteraceae, they are one of the two largest families of flowering plants. The Orchidaceae have about 28,000 currently accepted species, distributed in about 763 genera.[2][3] The determination of which family is larger is still under debate, because verified data on the members of such enormous families are continually in flux. Regardless, the number of orchid species is nearly equal to the number of bony fishes, more than twice the number of bird species, and about four times the number of mammal species.

The family encompasses about 6–11% of all seed plants.[4] The largest genera are Bulbophyllum (2,000 species), Epidendrum (1,500 species), Dendrobium (1,400 species) and Pleurothallis (1,000 species). It also includes Vanilla (the genus of the vanilla plant), the type genus Orchis, and many commonly cultivated plants such as Phalaenopsis and Cattleya. Moreover, since the introduction of tropical species into cultivation in the 19th century, horticulturists have produced more than 100,000 hybrids and cultivars.

2. They Are Serious Sexual Freaks.

Catasetum, a genus discussed briefly by Darwin, actually launches its viscid pollinia with explosive force when an insect touches a seta, knocking the pollinator off the flower.

After pollination, the sepals and petals fade and wilt, but they usually remain attached to the ovary.

The complex mechanisms that orchids have evolved to achieve cross-pollination were investigated by Charles Darwin and described in Fertilisation of Orchids (1862). Orchids have developed highly specialized pollination systems, thus the chances of being pollinated are often scarce, so orchid flowers usually remain receptive for very long periods, rendering unpollinated flowers long-lasting in cultivation. Most orchids deliver pollen in a single mass. Each time pollination succeeds, thousands of ovules can be fertilized.

Pollinators are often visually attracted by the shape and colours of the labellum. However, some Bulbophyllum species attract male fruit flies (Bactrocera and Zeugodacus spp.) solely via a floral chemical which simultaneously acts as a floral reward (e.g. methyl eugenol, raspberry ketone, or zingerone) to perform pollination.[11] The flowers may produce attractive odours. Although absent in most species, nectar may be produced in a spur of the labellum (8 in the illustration above), or on the point of the sepals, or in the septa of the ovary, the most typical position amongst the Asparagales. 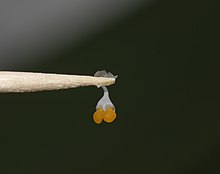 Phalaenopsis pollinia (orange) attached to a toothpick with its sticky viscidium

In orchids that produce pollinia, pollination happens as some variant of the following sequence: when the pollinator enters into the flower, it touches a viscidium, which promptly sticks to its body, generally on the head or abdomen. While leaving the flower, it pulls the pollinium out of the anther, as it is connected to the viscidium by the caudicle or stipe. The caudicle then bends and the pollinium is moved forwards and downwards. When the pollinator enters another flower of the same species, the pollinium has taken such position that it will stick to the stigma of the second flower, just below the rostellum, pollinating it. In horticulture, artificial orchid pollination is achieved by removing the pollinia with a small instrument such as a toothpick from the pollen parent and transferring them to the seed parent. 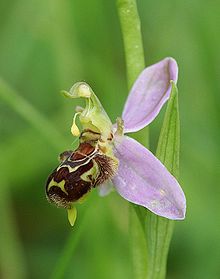 Ophrys apifera is about to self-pollinate

Some orchids mainly or totally rely on self-pollination, especially in colder regions where pollinators are particularly rare. The caudicles may dry up if the flower has not been visited by any pollinator, and the pollinia then fall directly on the stigma. Otherwise, the anther may rotate and then enter the stigma cavity of the flower (as in Holcoglossum amesianum).

The slipper orchid Paphiopedilum parishii reproduces by self-fertilization. This occurs when the anther changes from a solid to a liquid state and directly contacts the stigma surface without the aid of any pollinating agent or floral assembly.[12]

The labellum of the Cypripedioideae is poke bonnet-shaped, and has the function of trapping visiting insects. The only exit leads to the anthers that deposit pollen on the visitor.

In some extremely specialized orchids, such as the Eurasian genus Ophrys, the labellum is adapted to have a colour, shape, and odour which attracts male insects via mimicry of a receptive female. Pollination happens as the insect attempts to mate with flowers.

Many neotropical orchids are pollinated by male orchid bees, which visit the flowers to gather volatile chemicals they require to synthesize pheromonal attractants. Males of such species as Euglossa imperialis or Eulaema meriana have been observed to leave their territories periodically to forage for aromatic compounds, such as cineole, to synthesize pheromone for attracting and mating with females.[13][14] Each type of orchid places the pollinia on a different body part of a different species of bee, so as to enforce proper cross-pollination.

A rare achlorophyllous saprophytic orchid growing entirely underground in Australia, Rhizanthella slateri, is never exposed to light, and depends on ants and other terrestrial insects to pollinate it.

Catasetum, a genus discussed briefly by Darwin, actually launches its viscid pollinia with explosive force when an insect touches a seta, knocking the pollinator off the flower.

After pollination, the sepals and petals fade and wilt, but they usually remain attached to the ovary.

In 2011, Bulbophyllum nocturnum was discovered to flower nocturnally.[15]

Some species, such as in the genera Phalaenopsis, Dendrobium, and Vanda, produce offshoots or plantlets formed from one of the nodes along the stem, through the accumulation of growth hormones at that point. These shoots are known as keiki.[citation needed]

3. They Are Kinda Lewd *cough*

The third grader in me giggled:

The type genus (i.e. the genus after which the family is named) is Orchis. The genus name comes from the Ancient Greek ὄρχις (órkhis), literally meaning “testicle“, because of the shape of the twin tubers in some species of Orchis.[25][26] The term “orchid” was introduced in 1845 by John Lindley in School Botany,[27] as a shortened form of Orchidaceae.[28]

In Middle English, the name bollockwort was used for some orchids, based on “bollock” meaning testicle and “wort” meaning plant.[29] A kinda not-related but very related side note:

So, about a decade ago I had my foot run over by a Lamborghini (long story – looking back at it, the make of the car didn’t really matter). So I told my friend and she said, effortlessly, “you could make a fortune. You know there are broken-foot-fetishists out there. Google it.”

And she was right. I got very distracted by this. So much so, that I put together a little “gallery.” Please, share it with your “friends.”

MY POINT: I kinda stumbled upon (innocently and while reading the Bible)  some soft-porn video(s — there is an amazing number of them) for “Orchidaceaphiliacs.” I know. I am amazed at my search skills as well. Pretty sure Boolean logic was not meant for this particular use, but who are we to judge?

Ya’ll are freaks and I am too and I love you for it. So from me to you, with Orchid Love: